Dark times, America. Dark times. I’m not saying that we’re solely responsible for the world’s devastating income disparity, dangerous climate change, greedy and short-sited military-industrial complex, increasing tensions at home and abroad between various ethnic, racial, religious, and social groups, or atrocious violence in Central/South America, Africa and the Middle East…but we’re pretty much solely responsible for all of those terrible things. But those aren’t what I want to talk about today.

No, what I want to talk about is something far, far, far worse. It’s an evil so pervasive, so all-encompassing, so unforgivable, that if some advanced alien civilization encountered our species, and decided that we were too wretched, too stupid, too horrifying to allow to live, and they summoned a shower meteors to end all life on earth…I’d understand. They’d be right to do it.

What I’m talking about of course, is driving slowly in the left lane on the highway.

For those of you who have never driven on a multi-lane highway in the United States, the far right lane is the “slow” lane, reserved for buses, large trucks, and other vehicles incapable of safely traveling at a very high rate of speed. The center lane is the “travel” lane, designed for, you guessed it…traveling. This is where cars and trucks can set the cruise control, and glide safely and efficiently to their destination. The left lane however, the glorious left lane, is the “passing” lane, or “fast” lane. As its name implies, this lane is for when you wish to overtake someone, or drive at a higher rate of speed than the majority of traffic. 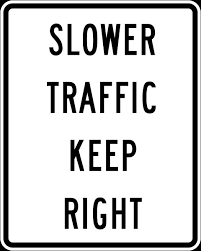 All because some slow-poke decided not to obey the posted traffic laws/adhere to the slightest modicum of common-sense, and chose instead to drive in the fast lane.

This choice to me is inconceivable. I literally cannot conceive of why somebody would do something so wretched. I’ve wracked my brain, and done thousands of hours of research, and I’ve come up with some theories, but ultimately, the thought process behind this terrible choice remains so foreign, so absurd, that I simply cannot process it.

Here is why I think, maybe, people drive slowly in the fast lane:

These are the top three theories I have, through exhaustive research and rigorous application of the scientific process, come up with. Should additional information ever be discovered in the field of slow-left-lane-driving studies, I will certainly provide you with that up-to-date information as quickly as feasibly possible, as befits my responsibility as a scientist and advocate for the people.

In conclusion, the left lane is for fast driving/passing only. If somebody is driving faster than you, get out of their way immediately. If you don’t, you’re either dumb, villainous, or unforgivably self-righteous (IE dumb AND villainous). If this is you, a pox upon your families. Your entire line deserves to be expunged starting from the beginning of time on. Your family tree needs to be chopped down, peed on, burnt, peed on again, and the ashes scattered to the four winds, while the ground it grew on is salted with the frustrated tears of all the poor innocent people you’ve inconvenienced and harmed by driving slowly in front of them.

Max has been better than you at writing since the third grade. He currently lives in Connecticut, but will someday return to the desert.
View all posts by Max T Kramer →
This entry was posted in Max's Journal and tagged america, driving, fast lane, humor, road rage. Bookmark the permalink.