So you’re saying you’re a racist.

So how about class? Class is another clear indicator of privilege that you’d have to perform some serious mental acrobatics to deny. The richer you are, the more privileged you are. That’s self-evident.Say you want to… I don’t know, buy something, or go on a trip, or go to college, or get a job, or murder a hooker, or do crime and get away with it, or eat an endangered species, or literally fucking anything else. Obviously, OBVIOUSLY, any of these desires are easier to attain if you can throw a shit ton of cash at the problem. Just as obviously, any of these desires will be harder to attain if you don’t have a fucking dime. So yes, class privilege is a thing. Have I lost you yet, or ARE WE STILL IN AGREEMENT?

Now, what if you’re rich, but disabled? Does your class privilege somehow counter act or negate your physical disadvantage? What if you’re poor, but physically fit? Are you no longer privileged by your able-bodied state because you don’t have financial security? Or ::GASP:: can you be both privileged in some ways but disadvantaged in others, because life is fucking complex and convoluted and confusing? Here’s the thing. Privilege exists in many forms, and it is entirely possible to be both privileged and disadvantaged by different things at the same fucking time.

Take me for example. I have really bad eye-sight. That means, when it comes to vision-based activities, I am at a disadvantage. I can admit that because I’m really, really brave and heroic. It also helps that I am privileged in basically every other possible way there is to be privileged. I’m healthy. Anything you can do physically, I can usually do better. I’m young(ish). While death comes for us all, he probably isn’t breathing his nasty-ass graveyard fart breathe over my shoulder quite yet. I’m cis-gendered. So I can use any bathroom with a little dude on the door without worrying about angering some close-minded bigot,because I physically look like that little door dude, and I’m so comfortable in my own body that I can helicopter my dick around my house without feeling anything but pride and humor, and maybe a little bit of physical pain when I accidentally smack said dick against the refrigerator door. I’m straight, so I never have to worry about businesses refusing me service, or a friend, family member, or stranger judging me based solely on who I like to stick my wiener in, at least once it heals from the refrigerator door incident. I’m a guy, which, obviously is pretty cool for me, but sucky for anybody who isn’t a guy, because male privilege is a thing, and feminism exists for a reason.

Oh also, I’m white. and White Privilege is real. And that’s the purpose of this post. For those of you who recognize and acknowledge white privilege, right about now you’re probably thinking hell-yeah brother, preach. And for those of you who perplexingly disavow white privilege, you’re probably thinking oh, fuck this guy, I knew I always hated him, he’s a dumb idiot who isn’t even cool.

First off, I’m SUPER FUCKING COOL, so go fuck yourself you soggy floor noodle. Secondly, how can you even say that white privilege isn’t a thing? What you’re basically saying is “Hello, I’m racist.” If you admit that you’re racist, then okay, that’s that. If you like to think you’re not racist however, but you still really don’t believe that people of color have the short, shitty end of the stick in America, we might be living in different Americas.

We exist in what historically was, and still is, a systemically racist society. All you need to do to prove that is take a quick peek into your nearest jail or prison. The numbers don’t lie. There are EXTREME racial disparities within our criminal justice system. While people of color only make up about 30% of our population, they account for over 60% of inmates. How many white men are incarcerated? Less than 1 in 100. How many black men? 1 in 15. In fact, 1 in 3 black men can expect to go to prison in their lifetimes. One third of fucking black dudes can expect to end up behind bars at some point. What the shit? So how can this be? What is the reason for these crazy statistics?

Well. Either you think that people of color are just more predisposed to crime, that there is something just inherently wrong with them, which does in fact mean that you’re a damned racist, OR you have to admit that there MUST be something wrong with the system itself. The system must benefit whites. Whites must be privileged.

Now, by all means, try to make an argument against those numbers. Try to explain them away as something other than what they are, which would be the result of historic and continuing systemic racism against people of color. Give it a shot. Talk to me about affirmative action and how it makes your white life so unfairly difficult, without doing any research on the hiring practices and socio-economic issues which made and still make affirmative action programs necessary. Regale me with your completely unbiased tales about how the war on drugs isn’t really just a war on race. Tell me, oh, it’s not about race, it’s about money. More poor people end up in prison, and black people in America just so happen to, completely randomly by chance and nothing more, be poor in higher ratios than white people (26% blacks vs 10% whites), and that’s why there’s more black people in prison. Hmm. Okay. But those poverty numbers don’t exist in a vacuum either. Why, if that is your argument, are more black people poor? Is it because they’re just simply not as good at making money, because they’re naturally lazy, or dumb, or whatever racist fucking thing you want to say, although I suggest you don’t say it to me in person because I’ll punch your sternum through your spine, OR, are black Americans at greater risk for being poor because of a complicated system of social and economic factors that basically amount to the fact that we once exploited them as fucking slave labor, and the effects of that don’t disappear overnight, and our society remains racist as fucking fuck? I mean, black people weren’t even guaranteed the right to vote until 1965. There are congressmen STILL SERVING who were voted in to their positions before black people were allowed to vote. I’m not saying that they’re responsible for racist policies, I’m just stating a possibly pertinent tidbit of fact. We went to war with Britain over a minuscule tax on tea because we weren’t properly represented in British parliament when it came time to make the tea taxing decision.  And yet we wonder why movements like Black Lives Matter have such anger and vitriol over something minor like hundreds of years of oppression.

If you’re white, and you really believe that your whiteness doesn’t contribute in ANY WAY to your privilege in our society, then you’ve clearly never been pulled over just for DWB. Your parents have never had to have “the talk” with you about law enforcement. If you’re white, and you don’t understand why passionate movements like Black Lives Matter exist, then you clearly really don’t think black lives matter.

It’s like the All Bones Matter meme from twitter. Disagreeing with Black Lives Matter and countering with All Lives Matter is like having a broken fucking arm, and saying wait, All Bones Matter! Yeah, all bones matter, but MAYBE WE SHOULD FOCUS ON THE FUCKING BROKEN ARM RIGHT NOW.

I don’t know how else to say this. I’m white. I certainly don’t feel guilty for being white. I love being white. It’s pretty awesome.I just think that too many white people are hearing their black friends and neighbors say hey, something’s fishy here, something’s not right, and instead of listening to them, they’re going nope, your experiences are invalid, you’re wrong, shut up, shut up, shut up.

You can be white and experience various disadvantages. You can be black, and experience various advantages. Hell, you can even be a gun-toting, fiscally conservative, pro-law enforcement, pro-military, pro-women, pro-LGBT, pro-choice, pro-People of Color, white, middle class, mother fucking Champ from Connecticut who admits that one of his many privileges is white privilege because he’s not a racist dingbat. Life is complicated like that. Simply put, at the end of the day, your whiteness is more likely to be an advantage, and your blackness a disadvantage, in the fucked up, mixed up, muddled up world we live in here in America. That’s called white privilege. 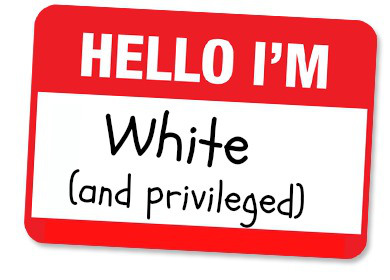 Max has been better than you at writing since the third grade. He currently lives in Connecticut, but will someday return to the desert.
View all posts by Max T Kramer →
This entry was posted in Max's Journal and tagged america, black lives matter, humor, politics, race, white privilege. Bookmark the permalink.

4 Responses to So you’re saying you’re a racist.