I am a creature of routine. I prefer eating the same things at the same times for days on end. You could set your watch to the regular motions of my bowels. I have a set sleep schedule, from which any deviation causes me to spiral into a bottomless pit of rage and despair. I enjoy the same books, and the same music, and the same TV shows and movies on repeat to infinity and beyond.

Because I am a creature of routine, I find that I am often stuck slavishly adhering to my habits, even when those habits are no longer desired. In the morning for instance, after I’ve been woken up approximately six minutes before I actually want to get up by the insistent demands of my bladder, and after I’ve stretched the kinks out of my back and shambled downstairs blinking the unpleasant crusties from my eyes , I enjoy a crisp, refreshing bowl of sugary cereal, even though at my age, that really isn’t the healthiest choice to start my mostly sedentary day. Intellectually, I know I should be consuming some sort of fruit, or maybe a couple of egg whites, and not eighteen servings of cocoa blasted sugar bombs, but the thought of eating anything other than a bowl of cereal first thing in the morning to me is simply inconceivable. Equally as unhealthy, while I am eating my cereal, I like to catch up on my social media.

It’s always a disappointment.  First comes Facebook, which honestly, I don’t really even know why I still have, since nobody posts hilarious jokes or sexy pictures except me. Instead, I’m treated to a disheartening parade of newly engaged couples, or newly wedded couples, or newly be-babied couples, all while I know that Mistress is lurking somewhere in the shadowy background of my kitchen like Gollum from the Lord of the Rings, scratching behind her ear with her taloned foot and mumbling demands for a precious ring of her own. Next, I try Snapchat, in the naively optimistic hope that I might have received some tasteful nudes from hitherto unknown admirers. Sadly, this is never the case. I don’t like Twitter, since it doesn’t have enough bright lights or pretty colors, so I finish my tour’de’media with Instagram, which, thanks to its abundance of fitness babes and motorcycle companies I follow, is always a consistently enjoyable note to end on. Also, it has memes.

I don’t know if as a whole, we’ve all collectively recently become depressed nihilistic bastards, wallowing in a mire of existential dread, or if we’ve always been this way, but it’s finally socially acceptable to share our macabre cynicism with a wider audience. Either way, I love me some sadness memes. Of course, the State of the Union being what it is, most of the trending topics have to do with President Trump, and the bewildering circus freak show that is the current White House. His most recent focus has of course been Kim Jong Un, and North Korea, probably in a transparent yet somehow still semi-successful bid to direct our attention away from all the other perplexing bamboozlery going on over there at 1600 Pennsylvania Avenue.

Here’s the thing about a war with North Korea. It’s a bad idea. It’s a bad idea for so many reasons, and really not a good idea for any reason, but Trump is likely salivating over the idea because he knows that nothing creates a patriotic fervor like a foreign war, especially amongst the type of people who form his support base, and also because he thinks of himself as some sort of godlike gift to this nation, and he figures crushing one of the last great bad guys of our era will cause us to spontaneously erect statues and shrines in his honor.

That’s really it, that’s probably the extent of his thoughts on the matter. He doesn’t want to invade North Korea to save the poor oppressed North Korean people. He doesn’t want to invade North Korea to protect the vulnerable South Koreans. He just feels like him and Kim Jong Un are in a dick wagging contest, and he wants Kim dead and mounted on his wall like a hunting trophy. Trump has, unfortunately, surrounded himself with incompetent stooges, shady businessmen, and military leaders. He has no experienced diplomats to temper his impulsive urges. Admittedly, unlike his other political appointees, I have nothing bad to say about the military leaders Trump has appointed, they are highly respected, experienced, and intelligent individuals, BUT when presented with a problem, military people will invariably come up with military solutions. When the only tool in your toolbox is a hammer, everything suddenly looks like a nail.

This is not a good situation to be in when it comes to North Korea. Especially because any punitive military action we take with North Korea will have huge ramifications for their neighbors, like China and South Korea. This being the case, you would think that we would be closely engaged with our friends and allies in South Korea, but the disheartening fact is that we don’t even have a current ambassador assigned to South Korea. Go figure.

Here’s the thing about North Korea. They don’t actually want a war with us. If we went to war with them, we would crush them. We would have air superiority, naval superiority, technological superiority, strategic superiority and tactical superiority. We would win that fight, likely with little to no actual danger to any United States lands or properties, other than the hundreds of thousands of young soldiers who we would throw away in the meat grinder that is any land war in Asia.

North Korea’s weapons program is not advanced enough to threaten the mainland US, despite their best efforts. They likely do not have reliable long range ballistic missiles. What they do have, is plenty of mid-range missiles. So they can very much devastate the population centers of South Korea. Hell, there’s ten million people in Seoul alone, and that one city happens to be a stone’s throw from the North Korean border.

There’s no way around it. If we bomb, invade, or otherwise antagonize North Korea too much, their nukes are going to fall on South Korea. Our friends and allies will die by the millions. We’re putting our friends in real danger of being bombed, and Trump hasn’t even saw fit to send them an ambassador to talk about the situation. If they get fucked over because of our saber rattling aggressiveness, all the rest of our friends and allies are going to start questioning their safety with us around too.

Even if, by some strange miracle, we are able to win a war and topple the Kim regime quickly and bloodlessly, we still won’t be making any friends. The North Korean people are the most militaristic culture in modern history. Nearly everyone serves in the military. Sure their equipment might be rusty old Soviet cast offs or cheap Chinese knockoffs of Russian throwaways, but Western powers have more than learned that a sufficiently determined indigenous force, even if they’re just armed with sticks and rocks, can still seriously fuck up our shit. So, if the Kim family gets deposed, and another warlord takes his place, we get to keep fighting, probably for years and years and years. I’d guess this to be the most likely scenario, knowing what I know about the indoctrination present in the North Korean culture. That or China or Russia would rush in to claim some land and a cheap labor force, and we and South Korea would push back, and World War Three would start.

Less likely, but probably equally as devastating, is if no one stepped up the fill the void, and the North Koreans were suddenly left to their own devices. It’s basically a medieval country over there. They have no internet, limited electricity, limited reliable technology, limited medical resources, and nonexistent education beyond The Great Leader is Great. They have no idea what the outside world is like. If they lose the stability and control of their current oppressive government, their economy, such as it is, will collapse, and they are going to start starving and dying in droves. For a good many of them, their first idea is going to be to get the fuck out of North Korea. So where will they go? First, they’ll go to China, their ostensible allies, but you know damn well the Chinese are going to lock down that border hard, probably with deadly force. Next, they’ll go to reunite with their cousins in the South, where their influx will, if not stopped, likely cripple the South Korean economy and lead to continued strife and violence. So then their diaspora will look elsewhere.

Who is going to take them in? Us? Come on. We’re not even letting our own Southern neighbors in. We’re not even letting wealthy and well educated Doctors and Scientists from Muslim countries in. We’re certainly not going to welcome a horde of anachronistic Asian peasants across our borders, even if they’re just coming here because we blew the shit out of their homeland and they have nowhere else to go.

Oh well, at least the memes will be fire though. 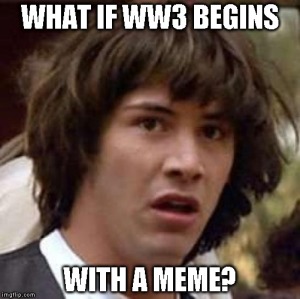 Max has been better than you at writing since the third grade. He currently lives in Connecticut, but will someday return to the desert.
View all posts by Max T Kramer →
This entry was posted in Max's Journal and tagged Diplomacy, kim jong un, North Korea, Routine, Social Media, trump, World War 3. Bookmark the permalink.

1 Response to On North Korea