It was election day. You voted, right?

I am a proud American citizen. I don’t vote.

I don’t vote, because what’s the point? The system is broken. The system is broken, and it’s the type of broken that voting can’t fix.  Let me clarify. I vote on the local level. I vote to approve or disapprove local ordinances, budgets, and laws, etc. These things affect me, and directly voting on them provides me with the ability to effect their outcomes.

What I don’t vote for, are politicians. My reasoning is, no matter who holds political office, I’m fucked. This isn’t just because I assume that whoever I vote for would selfishly pursue whatever agenda they or their financial backers desire, with no regard for little old me and my wishes. It’s also because voting new politicians into our current government is like changing the oil on a car with no wheels, and then wondering why it still won’t move. The oil isn’t the problem. Neither are our elected officials. It’s what they can do (be a dick) and can’t do (anything useful) once they’re in office that’s the problem.

Bipartisan means that there are two political parties, the jackasses and the douchenozzles. They’re the bullies on the block, and if you’re not affiliated with either gang, you don’t have enough street cred to hold down any turf. Even people who vote admit that if you don’t vote blue or red, your ballot is wasted. This is problematic because when there are only two sides in an argument, and the two sides arguing argue just for the sake of argument because they’re both pungent dingleberries, it’s fucking impossible to reach any sort of majority agreement. Since our political system is nominally a democracy, and things can only get done if a majority vote is reached, and our two representative parties refuse to play nice because they’re secretly just chocolaty-faced kids in a sandbox with only one Tonka truck, not a whole lot is going to be achieved. If additional legitimate options for political affiliations were present, or better yet, there were no political parties at all, it might be easier to get our elected officials to agree on important issues. Especially because the ideologies of the two existing dominant political parties don’t necessarily represent the majority of Americans who they are supposedly representing. Take me for example. As a moderately evil rich white guy, I prefer the economics of the Republican party aka make rich white guys richer. As a well-educated socially liberal atheist feminist who thinks people should mind their own damn business about personal shit however, the republican party’s conservative social agenda turns me off. You see my conundrum.

Beyond the ridiculousness of a bipartisan government, we have an electoral system. Basically, that means we don’t all get a direct say in government decisions, we just choose the lesser of two evils to represent us out of an outrageously small pool of candidates who are generally named bad and worse, and then we hold our breathe and hope that the person we chose lives up to our expectations and makes the right choices on our behalf, which they won’t because they’d already gotten everything they needed from us when they got our vote and every campaign promise ever made has been a lie.

The pool of candidates is so small because you need to fund your own political campaign, which means if you don’t have millions and millions of dollars to spend on lawn signs and transparently manipulative campaign advertisements, as well as the backing of one of the previously mentioned political parties, not enough people will know who you are, and you will never win an election. It doesn’t matter how smart you are, or how compassionate you are, or how articulate you are, or how patriotic you are. If you aren’t also rich, you won’t be elected.

Here is the life cycle of an elected official in the United States political system. Please note, this is not a “corrupt” or “scandalous” politician. This is one of the “good ones”.

Rich person decides to run for political office. Rich person receives bribes from other rich people/ groups of people/corporate entities/the devil in order to help pay for their campaign. Rich person uses their bottomless campaign funds to inundate the plebeian cattle with advertisements and enforce name recognition. Rich person makes false and impossible promises to cattle, like that they care about them and will work to help them. Rich person receives cattle’s vote, and gets elected. Cattle get an “I voted” sticker and feel good about themselves, because they contributed to the democratic process. Rich person then uses time in office to benefit the cronies that paid all those bribes for their campaign, blocks legislation proposed by the opposing political party as a matter of principle even if that legislation makes a lot of sense, and generally ignores the cattle, because who cares about them, they didn’t give the rich person millions of dollars and also they’re smelly and gross. Rich person finishes their term, leaves office, goes to their second home in the Cayman Islands, and continues collecting paychecks from the government until they are dead.

Doesn’t it seem problematic to you that all of our elected officials are rich? The last time I checked, not everybody in the United States is rich, so maybe exclusively having rich people “representing” us is a mistake. Now, I have nothing against the rich. I want to be obnoxiously rich myself. I just think that when you put only rich people in charge of our very large, very diverse nation, unless you yourself are also in the rich people club, you’re going to get some very disappointing results.

Like when your nation experienced the recent financial crisis, and the government banded together to protect the richest of the rich with bailouts and tax breaks etc. and they called it “trickle down economics”. Well guess what, trickle down economics is a joke. What’s going to be better for the economy? Making one rich person richer, so that they can build one rich person house and buy one rich person car? Or helping a hundred normal people make a decent wage, so that they can build a hundred normal people houses and a hundred normal people cars? Which scenario puts more back into the economy? We don’t need one person with more money, we need more people with some money. Our economic recovery needs to occur from the bottom up. This is common sense to anyone, but that’s not the legislation we get because our gridlocked bipartisan government is about as useful as an ejection seat on a helicopter.

I love our country, but our government fucking sucks. I’m not saying Obama sucks, or Bush sucked, or our senators or house representatives suck. The system they exist in sucks. Electing new officials to the same broken system won’t fix any problems. So no, I don’t vote. It’s like putting a new pilot in a plane with no wings. What’s the damn point?

Unless Odin is running for office. I’d elect the shit out of the All Father. 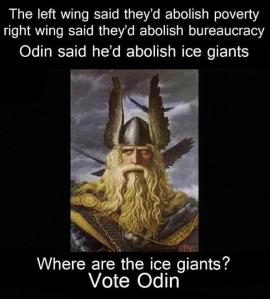 PS I do have some ideas on how to fix the broken system. Maybe someday I’ll share them with you.

Max has been better than you at writing since the third grade. He currently lives in Connecticut, but will someday return to the desert.
View all posts by Max T Kramer →
This entry was posted in Max's Journal, Uncategorized and tagged election day, government, humor, politics, voting. Bookmark the permalink.