The Legend of Florida Man aka Our Trip to Miami Beach

It began, as these things often do, with a birthday party. The party in question was two weekends ago, for my thousand year old grandmomma. Full disclosure, I had mixed feelings about going to the party, mainly because we had celebrated Mistress’ thirtieth birthday party well into the wee hours of the evening before, and I was nursing a disastrous hangover, courtesy of my overindulgence in crisply refreshing american lagers and enough fat rails of Dr. Rockso’s White Lightning to build a train track from here to the Rio Grande. Additionally, even though Grandma and I have been acquainted for the entirety of my life, we don’t really know each other at all. To me, she’s the loving but no-nonsense matriarch of the family, the mother to my mother, and the scarily old woman who sits in a plush recliner in the corner of her living room, her short, white hair poofed around her head like a wispy halo, and the tiny bits of her papery old lady skin which are not covered in knitted afghan blankets mottled and discolored like an overripe banana. To her, I’m just another one of the vaguely familiar, but bewilderingly multitudinous mass of grandchildren who intrude upon her tranquility during holidays and birthday celebrations. Even before she started going deaf, for years the extent of our personal communication has been limited to “You being good?”, Grandma’s generic catch-all query to all of her numerous descendants, and my reassuring reply of “Yes, Grandma.”

As it was however, I forced my abused body into motion and Mistress and I made the short drive across state lines to share in her birthday celebrations. Once there, after completing the obligatory round of affectionate greetings with those various aunts, uncles, cousins, plus ones, and hangers-on in attendance, and filling a plate with the somewhat untrustworthy smorgasbord of food available at any holiday potluck, Mistress and I were discussing our upcoming trip to Miami when I was startled to find my arm grabbed by Grandma’s claw-like grandma hand. Since we were not within striking distance of her recliner, and she is generally only semi-mobile at best, and that’s with the help of a walker cane, I’m still not sure how she had threaded her way through the crowded room without solicitous younger relatives clearing her path like the Genie of the lamp announcing the entrance of Prince Ali Alibaba from Disney’s Aladdin. Even more disconcerting, she then addressed me by name, something I had been fairly certain she had never bothered to learn, blessed as she is with an overabundance of grandchildren, of which I am in no way the most interesting or memorable. She said, “Max. When you enter the land of the newlyweds and nearly-deads, beware the Florida Man.”

I don’t know about you, but when a deaf, infirm, anachronistic dowager references an internet meme, and when a previously sunny, warm day turns dark and forbidding while she does it, I sit up and take notice. Understandably shaken, I soon excused myself from the party, and returned home with Mistress, where I began to research.

“Florida Man, accused of murder, wants to show his penis to the jury…”

“Florida Man choked co-worker for talking to his girlfriend…”

As my research progressed, I grew more and more disgusted. Unfortunately, I also grew more and more intrigued. Who was this Florida Man? Where did he get his strange super powers? When would his reign of bizarre terror end? Could he be defeated? I tried to hide my obsession from Mistress, but as we boarded the plane for our flight to Miami, I think she suspected the direction our vacation was about to take.

No longer would we simply be resting in the warm sand of Miami Beach, pickling our insides with overpriced beverages, and playing “hot-or-not” with the various passerby. Nay. I was on a mission. I needed answers. I needed to find the Florida Man.

What was clear, is that he is a shy and elusive creature, but prone to outstanding bursts of physical violence of a hilarious and ironic nature. If Mistress and I just waited around for him to appear, we would surely fail in our quest. We needed to be mobile. Step one, we would need a car. Since their was no 1989 Camaro RS with a leaky T-tops roof and color mismatched replacement passenger door conveniently waiting for us when we got off the plane, we had to use the next best thing, a rental Ford Fiesta. Our hope was that its particular mix of rickety inexpensiveness, shoddy domestic craftsmanship, and exotic latin name would appeal to the conflicted sensibilities of the unpredictably patriotic FloridaMan, allowing us to get closer than would be possible in a nicer foreign vehicle.

Once our transportation was secured, we drove to our lodging, an Airbnb rental in the North Beach area of Miami Beach. I won’t give you much details, since there is currently a war on between Airbnb and the local hotel industry in Miami beach, and I wouldn’t want our lovely hostess to be caught in the crossfire should this post garner national attention, which it likely will since it’s topic concerns such a polarizing figure as the mighty Florida Man. Suffice to say, it was a small ranch style home which we shared with another couple who were also on holiday. Unfortunately, they spoke very little English, so I was unable to impress upon them the great danger posed by Florida Man. They may well be dead now, their faces consumed by Florida Man in a fit of bath-salts fueled pique, but I maintain hope that they were able to enjoy the entirety of their vacation unmolested. 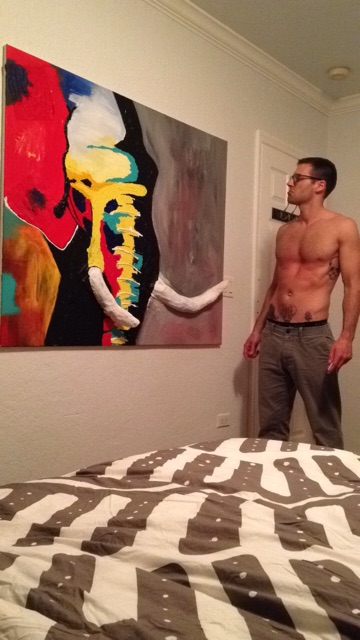 Our Airbnb room. That painting wasn’t the only elephant trunk in the room that weekend if you know what I mean.

Since our flight was late and we arrived at our rental in the evening, we resolved to get some sleep before we began our search, so we settled down for a night of uneasy Florida dreams on the creaky and uncomfortable pull out mattress present in our Airbnb bedroom. I was briefly woken around 4 am by the distressing sound of multiple cats screaming outside our bedroom window. Probably because Florida Man was nearby, perhaps murdering his auntie-wife with a coconut or popping his scrotum through the gaps in a chain link fence for no discernible reason, or doing some other Florida Man type activity. In the morning, unrefreshed, but resolved to move forward with our quest, Mistress and I decided to spend the day at the beach. Although or quarry was more likely to be found in the mosquito infested backwater swamps further inland than a well patrolled busy beach, we figured that only by thinking like the Florida Man could we hope to root him out, so a devastating case of sunburn and heat exhaustion would be invaluable in bubbling our brains back to the troglodytic level of self-restraint and common sense usually demonstrated by the mysterious creature.

After drinking a disgusting slurry of room temperature shower beers, and fully crisping ourselves for the entire morning in North Beach, we drove to South Beach to see what all the fuss was about. South Beach was…not my scene. Imagine an overcrowded beach full of mostly unattractive old people with leathery walnut brown skin. Imagine a road along that beach full of bumper to bumper traffic, with everybody driving the finest of expensive exotic high performance super-cars at .2 miles per hour screaming look at me, look at me, look at me, while their underutilized and abused vehicles overheat in the unforgiving sun, and on the other side of the road are a series of overcrowded mediocre restaurants serving over-sized, over-priced drinks to sunburnt tourists who really shouldn’t be day drinking any more, and all of them are wearing less clothing than they should, and are also screaming look at me, look at me, look at me in a vulgar display of wealth particular to the newly wealthy or strangely insecure. This is South Beach, a shrine to classless ostentation and self-centered peacockery. 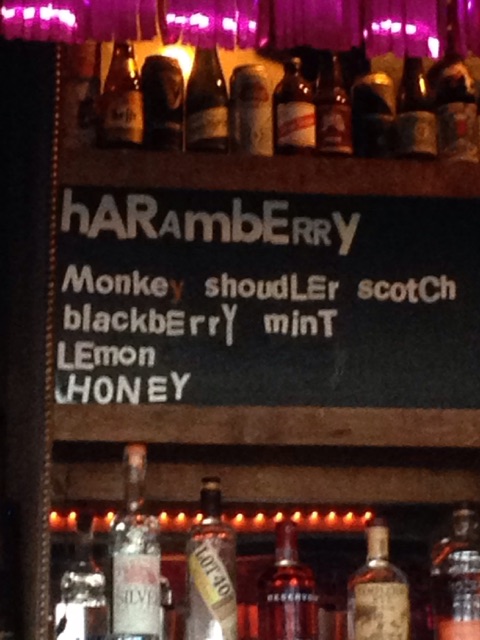 Escaping that nightmarish pit, we returned to North Beach, where we went out to dinner, eschewing the various delicious looking Cuban restaurants near our rental for a stomach churning brinner feast at the local Denny’s, high cuisine for Florida Man.

The next day, we beat a path inland, driving out to the everglades where we chartered an airboat to assist us in our hunt. Unfortunately, all we ended up seeing was a bunch of fascinating scenery on the river of grass, full of interesting creatures and exciting experiences. It was quite lovely, a lot of fun, and entirely disappointing. Who cares if we had seen a million alligators? We hadn’t seen the only prey we really cared about.

To cheer ourselves up, on the way back to our Airbnb rental we stopped in the Wynwood neighborhood of Miami, a former commercial district which has been fully hipsterified with a plethora of incredible street art, trendy bars, and various art and music exhibitions. It was pretty cool, but it was not the type of place where we would come face to face with the Florida Man.

The following day, somewhat dejected from our failure to find FloridaMan in the swamps, which had been, we thought, the plan most likely to succeed, we returned to the beach to recenter ourselves and plan our next move. Mistress Kay, suffering from a bit of a hangover, and a distinct lack of determination, was content to admit defeat and enjoy the remainder of our trip relaxing in the ocean, but I would hear none of it. I had come to this crappy panhandle with a distinct goal, and damn it I was going to do everything in my power to achieve it. 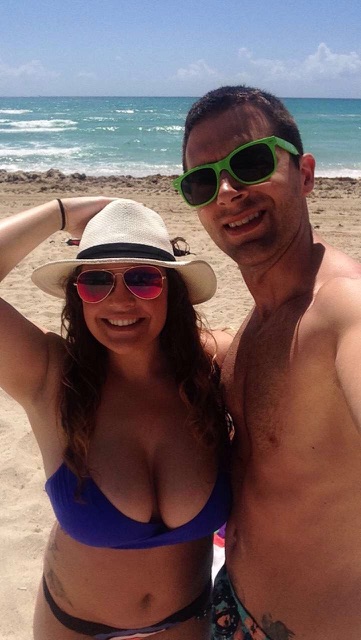 I’m not proud of what came next. I left Mistress there on that beach. Taking the car, I careened back inland, stopping just long enough to buy a trunk full of cheap liquor and a few pounds of crystallized meth amphetamines. Posting up in an empty Walmart parking lot, I evidently spent the next several hours putting all of the substances which had filled the trunk of the Fiesta into my body with single-minded purpose. I say evidently, because I, not surprisingly, don’t remember what happened after that. I do know that my plan was to achieve a mental state of heightened shenaniganry close to the thought patterns of the volatile Florida Man, in the hopes that in this state, I would be drawn to him like a moth to a flame or iron filings to a powerful magnet.

Unfortunately, exactly what happened after then will always be a mystery, since I eventually blacked out, and awoke two days later face down on the floor of a double-wide trailer home in a burnt down trailer park, naked, covered in mosquito and hooker bites, in a puddle of blood and viscera from my disemboweled alligator bride, whom I had stabbed with a broken moonshine jar during an argument over Pokemon Go. In my obsessed quest to find Florida Man, I had found something far worse. I had become that which I hunted. I WAS Florida Man. With the right circumstances, we are ALL Florida Man.

Legend has it that this knowledge drove me mad, and I remain in Florida to this day, lurking in the darkness, biding my time, waiting for the next opportunity to strike. Beware the Florida Man.

Max has been better than you at writing since the third grade. He currently lives in Connecticut, but will someday return to the desert.
View all posts by Max T Kramer →
This entry was posted in Max's Journal and tagged Alligator, Florida, Florida Man, humor, Miami, Miami beach, Party, South Beach, vacation. Bookmark the permalink.