Pilgrim Granny and the Legend of Tiny Town

Gaze in wonder upon the mystery and glory that is my Grandma. Some may say that this photograph is proof that eventually, all old people end up looking exactly the same, regardless of race or sex or gender, before eventually slipping back into the bubbling primordial ooze from whence they came. I choose to believe that it is incontrovertible proof that my unassuming grandmother is actually a previously unknown Targaryen heir, and should be elevated as such to her rightful place on the Iron Throne of Westeros. Which she would promptly replace with her over-stuffed power recliner, because Iron Thrones hurt her back, and she prefers to raise her feet up when she’s working on her crossword puzzles.

With or without this ancestral link to the dragon lords of Westeros, the woman is a legend. You know how people always like to joke about how “kids nowadays” have it so much better, usually followed by hyperbolic anecdotes about how the older generation had to walk to school sixteen miles every day, in a snowstorm, uphill both ways? I think my grandmother is where those jokes came from. The woman grew up on a tobacco farm in South Western Massachusetts, in a roughly 400SF, two hundred-year old farmhouse, with seventeen brothers and sisters. Her childhood was like the Beverly Hillbillies, if the Hillbillies had never struck oil. This is no joke, the house was so small, and the family so large, that the boys had to sleep outside in the chicken coop. Being stout Puritanical stock who could trace their lineage back to the Mayflower and beyond, the lads never even complained about their sleeping accommodations as far as I know. There are no records surviving regarding how the chickens felt about the situation.

Being raised on a tobacco farm, my grandma’s male siblings had the dubious pleasure of working in the fields until their lungs filled with tumors and were coughed inside out, courtesy of their constant exposure to carcinogenic pesticides. The womenfolk, spared this particular fate, tended to have longer lifespans, and were expected to enter into suitably feminine careers, such as marriage, or nursing followed by marriage, whereupon they would engage in stern Puritanical sex for the sake of procreation only.

My Grandmother, being a good and proper woman, became a nurse, and then married, and then, through a series of encounters with her new husband that likely involved lackluster, fully-clothed missionary in an unlit bedroom, began producing children of her own, eventually giving birth to three daughters before her husband suffered from a sudden and irreversible case of death. Thanks to the untimely demise of her first husband, which was endured with the typical stoicism of a woman whose entire experience with men to that point could have been summed up as “they work hard, then die horribly”, Grandma soon remarried, this time to a widower who brought two sons of his own to the family. Together, they swiftly set about doing what people without easy access to Pornhub or Japanese Manga have been doing for millennia, and they quickly welcomed three more girls into the family. One of which died shortly thereafter. As did her second husband, thus ending the Brady Bunch era of her life.

After losing two husbands and a daughter to the various cruel twists of fate, Grandma never remarried, instead devoting her energies to her nursing career, raising her seven surviving children, and then being the best loving but no-nonsense grandma ever to her swiftly multiplying grandchildren.

Eventually, she moved back to that hilariously tiny farmhouse in Massachusetts alongside a couple of her surviving and also widowed sisters, and they spent their days cranking the thermostat up to 8,000, counting pills, and bickering about whatever it is that geriatric roommate sisters bicker about. This, naturally, would be the Golden Girls era of her life.

This would also be the scenario I grew up accustomed to, and to this day I love visiting Grandma’s, not only because all of her many children and grandchildren, despite living in different states, are all super close and truly enjoy spending time together, and not only because the farm has horses, and sometimes peacocks, but mostly because of the house. The hilarious, ancient, miniature house. Sure, it’s appropriately sized for my increasingly diminutive Grandma, but it was most certainly not adequate for the seventeen people it once housed. It just doesn’t seem possible to me. My imagination cannot fathom it. Not just because of the small footprint of the home. It is legitimately SMALL. We all call it Tiny Town for good reason. 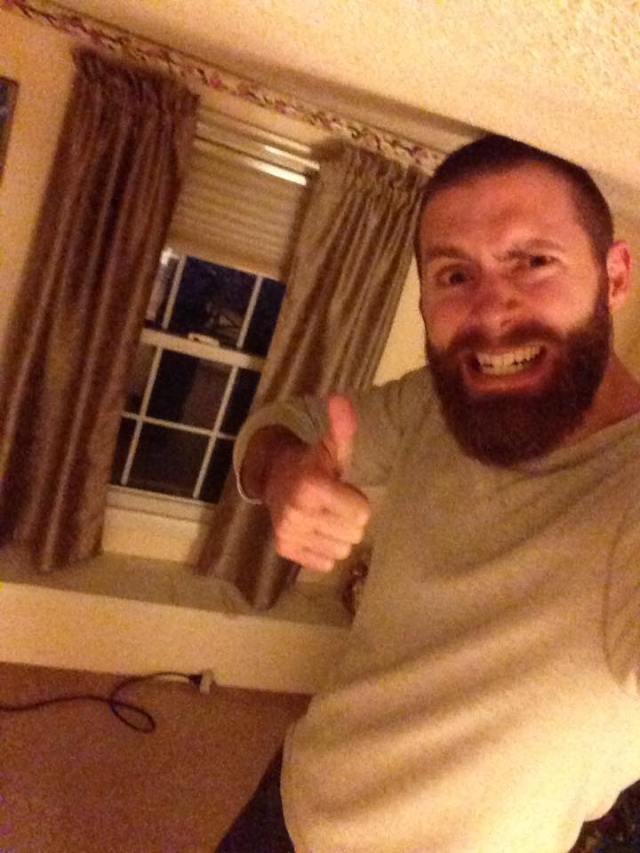 I’m not a short man. But I am not a giant man either. I’m 6’2″ on a good day. Tiny Town is not for the claustrophobic.

Although one of her sister-roommates has since passed on, Grandma remains in that little farmhouse absolutely slaying at solitaire, puzzles, and crosswords, and inhaling those smutty harlequin romance novels that are the mainstay of elderly lady’s nightstands everywhere. All of her grandchildren are grown, but she now has an ever increasing swarm of great-grandchildren periodically underfoot whenever she hosts a family gathering. These usually involve her inviting all of us into her home, where she will promptly turn off her hearing aids and ignore us as she plays solitaire or reads her books. Positively Legendary.

I write this ode to Grandma and Tiny Town, not because anything tragic has happened, thankfully it has not, but because this year, for the first time that I can remember, my sisters and I will not be spending the night in Tiny Town on Christmas Eve. This has been a tradition for my family harkening back to when my own father, holding strongly to family tradition, died young, suddenly and terribly, and my mother couldn’t face doing Christmas at home alone. Like all traditions eventually do however, it has at long last come to an end. Partially because I now own a house of my own only twenty minutes away from Grandma’s, where Mistress and I have our own comfortable bed, in stark contract to the Tiny Town sleeping arrangements, which usually end up looking something like this: 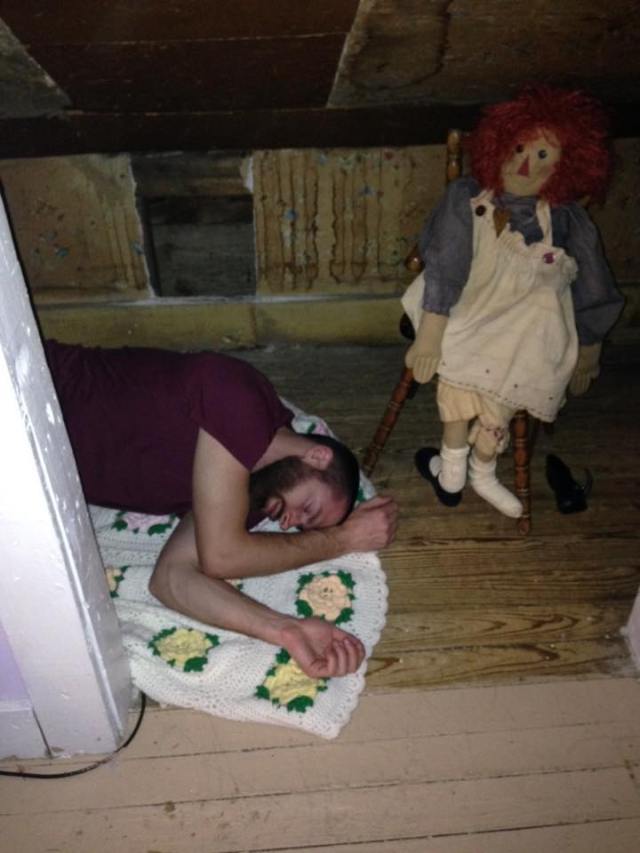 But also, not insignificantly, we won’t be spending the night at Grandma’s Christmas Eve because my sister and her husband had their first baby last month! While I can only imagine they made that strange decision because it provides them with a semi-mobile bag of replacement organs or blood, should they find themselves in desperate need of spares, but that’s such a long-term investment for something they may not ever even need, and in the meantime here they are stuck with a semi-sentient potato who thus far just farts and shits his way through life, so I don’t know, it just seems like a risky investment to me. In any case, the existence of this brand new creature whose entire life revolves around drinking titty milk, crapping his pants, sleeping, or crying really precludes any possibility of my sister’s family being able to spend the night comfortably in Tiny Town, and if they’re not spending the night, I sure as hell aren’t either.

Don’t go feeling bad for Grandma however, we’re all still going to be visiting Tiny Town bright and early Christmas day for family brunch, so she’ll have plenty of opportunity to turn her hearing aids off and ignore us then. Legend.

Max has been better than you at writing since the third grade. He currently lives in Connecticut, but will someday return to the desert.
View all posts by Max T Kramer →
This entry was posted in Max's Journal and tagged Christmas, family, grandma, holiday tradition, humor, Tiny Town. Bookmark the permalink.