My entire website is a nearly even mix of entertaining lies and uncomfortable truths. This post will mostly be the latter.

I haven’t gotten anybody pregnant as far as I know, so you may rest assured that this is currently just hypothetical musing on my part, and not some terrible confession made under duress as I flee for the Southern border in a hastily packed car while spurned lovers gather into a vengeful posse hellbent on tracking me down and strong-arming me into fulfilling my filial obligations. But the uncertainty remains.

As of the writing of this post, two of my closest girl friends are, judging from the size of their bellies and how sweaty and out of breathe they get while performing the most mundane of tasks, somewhere between 10 and 34 months pregnant with their first and second babies respectively, AND my two best male friends have both just fathered their first children, so I am surrounded by babies and my thoughts on the matter are somewhat unavoidable. 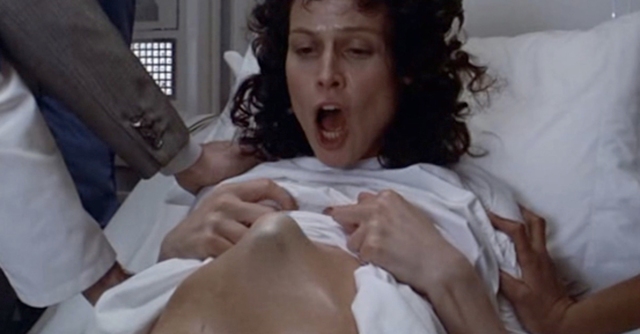 On the one hand, I am so excited for my best friends, but I also worry that they won’t like me anymore because I’m not part of their cool parents club, and that I will be doomed to a life of loneliness and ostracism as I slip slowly into the comforting madness of eternal solitude while they exclusively pal around with other parents and talk about diaper brands and nipple seepage and whatever else it is that people with young children talk about.

On the other hand, building a baby of my own just so the people I love still tolerate my presence in their lives does seem a little rash.

How do you know if having a baby is right for you? Wife Kay very much wants babies, and is constantly talking about how “we” want kids, and “we’re” thinking about trying for them soon, and “we” can’t wait to be parents, while I make noncommittal noises like “mmm” and “ah” and “hmm”, but all the while I’m internally screaming in terror as anxiety crushes my lungs, my blood pressure spikes, and my dick retracts like the head of a panicked box turtle.

Here’s the thing. I am an inherently selfish individual. I enjoy doing the things that I want to do, how and when I want to do them, and I avoid doing the things I don’t want to do, because they do not bring me joy. I won’t even buy a pet dog because I would be forced to adhere to another creature’s food and bathroom schedule. It is my understanding that children’s needs can be even more demanding than a dogs. That sounds not fun, and fun is a thing I happen to enjoy. Additionally, I like having a hot babe wife that makes more money than me, but I am fairly certain that if Wife Kay gets pregnant she’ll end up looking like Slimer from the Ghostbusters for the rest of our lives, and will also use the kid as an excuse to never work again. Is having a child really worth the stress of becoming a single income household so that my formerly hot wife can turn into a grotesque monster that eats chili cheesecake, watches daytime soap operas and washes herself with a rag on a stick?

Wife Kay after having babies

There are plenty of things you can love without any buts involved. Like books. I love books. They’re inexpensive, quiet, fun, and I enjoy every part of them. I love how they look. I love how they smell. I love how they have words in them, and when I read those words I can hallucinate about wizards and spaceships and shit. And, on the off chance that I get bored of a book I love, I can just slot it neatly into place in my bookshelf, or even give it away, and forget about it completely. But, if I get bored of a baby and stuff it into my bookshelf or give it away to a stranger at the bus stop, suddenly I’m a monster, and I’m going to jail? No thanks.

Beyond the fact that children seem like a lot of work, how do I know I won’t fuck it up completely? If I’m going to do a job, I want to do it right. Am I really qualified to give an impressionable youth the right mix of love, support, and spicy childhood trauma necessary to help them grow up into a hilarious and competent adult?

I have mixed feelings about fathers. My father was killed when I was a dumb little baby. So I crave father figures in my life with a desperate need. But also, I don’t really know what it is that fathers do? If my father had survived to raise me, I would be a completely different person than I am now, with a completely different set of circumstances, a different personality, different friends, different everything. So obviously I wish I had an opportunity to know him. But also…not. Because I like me. I like who I am. I like my friends. I like the life that I have. A life that I wouldn’t have had if he had survived. I can almost guarantee that, had he survived, I would be a worse person. Not because he was a bad person, but because my specific experiences have sculpted me into the man I am today, and if you take away those experiences and replace them with new ones, I would in many ways be lessened. That’s a complex situation that I can’t help but feel a certain level of guilt about.

My mother eventually found somebody new after my father was killed, and her new beau was around from when I was maybe four to about eighteen, so I did at least have a male figure in my life during my most formative years, but he unfortunately was just looking to lay some pipe with my babe mom, and was woefully unqualified for the dad role, so he received D+ to C- grades in fathering at best. Consequently, my role models for fatherhood were a dead man I never really knew, and a gruff stranger that could generously be described as father-adjacent, and all they’ve really taught me about fatherhood is that if I want my children to have great jokes and be happy and successful, the best thing I could ever do for them might be to just die immediately so they can figure their own shit out without my idiocy ruining them.

I don’t want to die yet.

Look, at the end of the day, I’m just not sure if I’m ready to have kids, or if I even want them at all, but all my friends are having them, and I don’t want to lose my friends.

I worry that the people I care about the most are growing up and maturing and moving on with their lives, and I don’t know if I can keep up with them.

I was already having fun, I don’t want things to change. I just want to do hoodrat things with my hoodrat friends, and be as stupid and silly and self-destructive as ever, but they don’t. How could they? Their lives aren’t their own anymore. Their lives belong to these tiny little miracle parasites that they’ve created and are now dedicated to. I think I might want to join them, but I’m scared. Does having a child mean that your life is over, and your dreams are done, because now you’re dedicated to your child’s life and dreams instead?

I know that having a child makes you lose a lot of sleep. Do you lose your dreams as well?

If all my friends have kids, and I don’t, do I lose my friends?

FATHERS. As Father’s day approaches, lend me your wisdom.

Max has been better than you at writing since the third grade. He currently lives in Connecticut, but will someday return to the desert.
View all posts by Max T Kramer →
This entry was posted in Max's Journal and tagged children, fatherhood, humor, new parents, parents. Bookmark the permalink.