If you follow me at all on any of my other social media accounts, you’re probably already familiar with my homeownershipsofar hashtag. If you aren’t, I basically use it exclusively as a platform to tell shitty jokes and puns about made-up situations that haven’t actually happened during home ownership…so far.

In reality, home ownership has been both deeply rewarding and outrageously stressful. When I was house hunting, unlike the troglodytes featured on most episodes of the HGTV show by the same name, I had humble desires, and understood that with my somewhat limited budget, I would ultimately be forced to compromise on some things. It was inevitable. I didn’t initially think that this attitude was in any way extraordinary, my realtor only admitted after the fact that every time during our very quick, smooth, and painless house hunting process when Mistress and I had a frank and understanding discussion with her about our realistic options instead of demanding a 13,000 square foot palace on the moon within a 4 minute commute to work on a budget of 56 cents and a broken rubber band, which evidently is how most first time home buyers act, that she’d drive home from the viewing furiously masturbating to the point of catatonia because of how wonderful we were as clients.

Here were my requirements.  I wanted a structurally sound home, privacy, and enough garage space to fit all of our vehicles. Those were not negotiable to me. Beyond that, I was willing to deal. The privacy was attainable by moving further away from the city, into a rural town where more land was not so expensive. I mostly work from home, so a super short commute in to the office was not high on my list of necessities.Really, it was actually a win for me anyway, I dislike people as a matter of course, so the less nearby, the better. The structurally sound home was found by looking at older 1940’s dwellings, which were built extremely well, unlike the crappy tract homes and McMansions available in newer developments. To keep within my budget however, I had to settle for a smaller home which only had one bathroom, and needed cosmetic updates. Still, honestly, to me that was a draw though. I know how OCD I am, if I had to clean and maintain a huge home, I’d never get to do anything else. And, if I moved in to a turn key, up to date, ready to inhabit, shiny, brand new home, I’d be tearing everything out and putting my own custom touch on it anyway, so what would be the point? When I found my little cape, in all its solid, private, massively garaged splendour, I was hooked. All the things that may have turned off my contemporaries in the market – it’s small, it’s isolated, the interior is dated, it only has one bathroom, the yard has been overgrown for so long it looks like Fangorn butt-fucked the forest moon of Endor and my house was built atop its bastard poop-child, were all exactly what I was looking for. All I had to do was play it cool and not start victoriously air humping until after the realtor drove away.

(Here’s the house exterior after I started taming the yard) 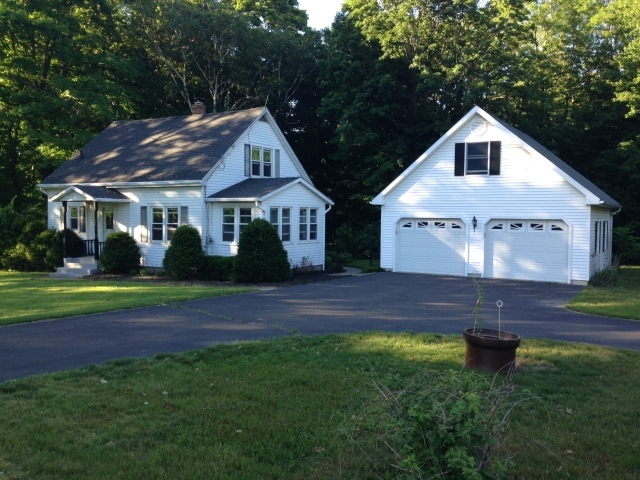 So I got my house. I got exactly what I asked for. Great. Now I’ve got to live with it.

You know what you have to do when you buy a fixer-upper? Fix it the fuck up. If you’re as willfully stubborn and proud as me, that means that you fix it up yourself. THAT means you spend all your spare money, time, and energy on house projects. You may have noticed a slowdown in my blog posting. For that, I apologize. But now you also know the reason why.

Instead of taking vacations to go somewhere tropical and luxurious, I’ve spent my time off swinging hammers and swearing. For the most part, I’ve done it all without major screw ups. Frankly, I’ve been feeling like hot shit. Like I’m the king of this castle and I actually know what I’m doing.

(Here’s the wood floors after I sanded and polyurethaned)

As you can see, those projects, although not perfect, came out pretty well. Certainly not bad for a DIY weekend warrior. At this point my confidence and self-satisfaction were reaching their peak. Then I redid my kitchen floor.

(Here’s the floor BEFORE…cabinets are being redone too.) 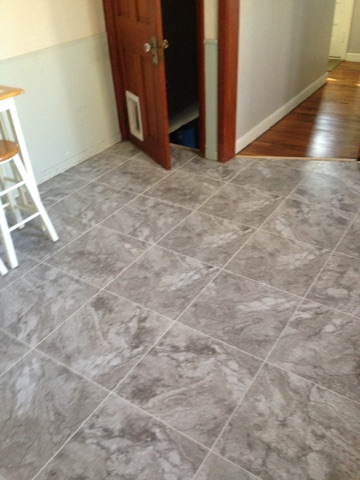 The entire process only took a few days, because I had help. I assure you, if I did it myself, I might still be midway through. Or dead in a tragic murder/suicide, where I murdered my house and then killed myself in embarrassment. Luckily, my stepdad, a career general contractor who has built gorgeous houses from coast to coast for decades, volunteered to take time away from his work and fly to Connecticut for a few days just to help me out. Let me tell you, it’s good to have family.

Like I said, I had been feeling pretty accomplished. I’ve held construction jobs before, I’m pretty handy, and I’m great at watching youtube videos if I don’t know how to do something. I’ve grown accustomed to being the go-to fixer/problem solver/handy man for my local family and friends. I felt pretty capable and confident. Then I saw a true professional work.

Bruh. Homie showed up, took a look at the floor, and got to WORK. He had all the trash layers of floor pulled out in minutes, then took a trip to Home Depot and loaded up on exactly what he needed for the project. When I go to Home Depot for a project, I usually have to go back 148 times for shit I forgot or didn’t realize I needed before I began. Not him. One truckload later and we had everything we needed. Then he set to with his typical robotic efficiency, requesting only a steady diet of Titos vodka, Marlboro reds, and sugary snacks. Our relationship has certainly evolved and progressed from when I was a small child and he was a somewhat resented authority figure, to more of a deep friendship and mutual respect, but having him working on a project like this was a trippy emotional time warp, to the point where if he asked me to get a tool or something from the garage, I found myself sprinting from the house to fulfill his request. As it was happening, I was thinking, what am I doing? I’m 31. I’m an adult man. A Manly adult Man. He doesn’t expect me to run.

That didn’t stop me from sprinting however.

Watching him do what he does for three days was humbling. The things he knows how to do, and do easily, are awe inspiring. He might not be as strong or as fast as he used to be, his hair is thinning, and his gut is looking a bit big and soft, but gods damn there’s no substitution for experience. The guy is good. I mean, I knew that, he’s worked on some beautiful properties for celebrities, and multi-millionaires, and discerning drug lords and all the rest, but seeing him in action, made me feel like a slow, dumb, idiot child with mitten hands and a lazy eye.

(Here’s me grouting the tiles like a little bitch) 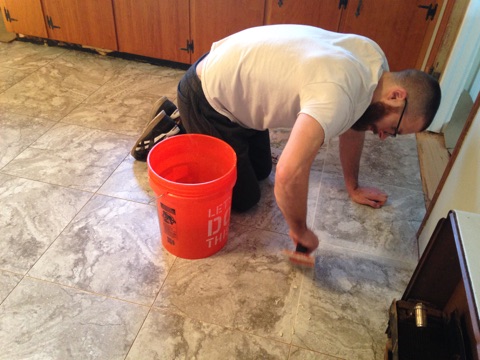 Unfortunately, pops had to get back to his real job before we could complete the entire kitchen overhaul, so now I’m back to muddling through on my own. I’m currently working on the walls, replacing beadboard wainscoting, removing wallpaper, retouching the drywall and painting, and refinishing the early-american style dated ass cabinets.

For the cabinets, I’ll be replacing the hardware with semi-concealed hinges and new pulls, trimming the cabinet doors out in a shaker style, then sealing, and painting. With new walls, floor and the new subway tile back splash and satin nickel faucet, they should look good. Of course, I’ll be doing all that without a professional’s help, so maybe they will fucking suck. I don’t think so though. I’ll post a pic when they’re done, and you can be the judge.

Still up on the to do list for the house:

-install quarter round along baseboards and crown molding around the ceilings

-Install second bathroom above the office

Home ownership. So far, it’s a real pain in my ass. Still feels pretty good though.

Max has been better than you at writing since the third grade. He currently lives in Connecticut, but will someday return to the desert.
View all posts by Max T Kramer →
This entry was posted in Max's Journal and tagged barn style door, DIY, groutable vinyl tile, home ownership, humor, kitchen remodel, refinished hardwood. Bookmark the permalink.